Press Release
Government’s most sensitive decision in the interest of the state’s youth
Baban Sabiwali taken by Gasun Seva Psandgi Mandal on last night
In the Examination of the Clerk / Office Assistant for the Minor,
State Government decides to cancel the Examination: Home Minister Pradeep Singh Jadeja 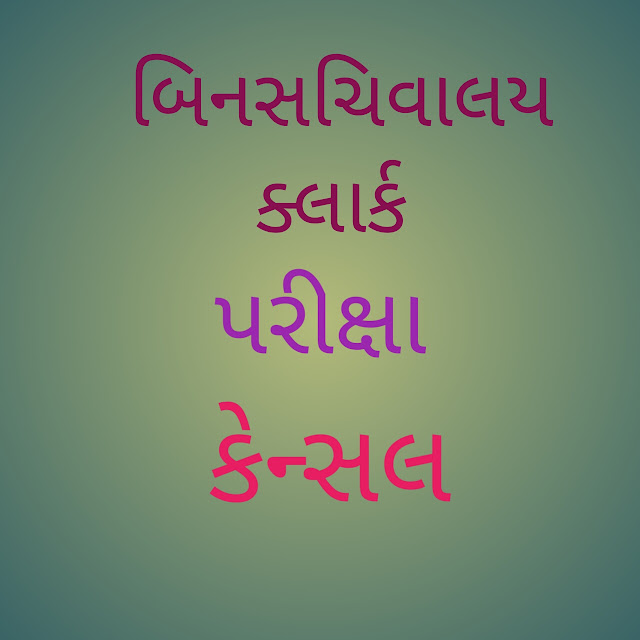 Reason for the cancellation of binsachivlay exam

*****
Reported state prepared by unadulterated general seat on examination.
Government Acknowledged: Absence of Disappearance in the First and Second Alarm
These friends were taken by Chief Minister to bring justice to Min Tuoyu.
The decision
. CCTV  Depending on the footage, there are three types of non-abusive women
Will be disqualified: FIR pre-registered
Three-way descriptions of each other by writing to each other in the compartments.
Will be considered eligible
Examination K
Law against nurse practitioners, suppliers, sugar auditors
The clauses will be strictly legalized
AT ATS in the investigation by filing a case in Gandhinagar, when the paper was leaked.
Strict punishment for criminals in connection with crime brand in Ahmedabad
State Government committed to provide
******

Shri Pradeep Singh Jadeja, Minister of State for Home, said,
On the last night of the raid, the non-government was taken over by the Govt.
The Bidwal activist / officer has decided to cancel the examination.
Minister Jadeja added that in order to facilitate the lives of the people of the state.
These examinations were made on the basis of the misconduct made by the students and the presentations.
They are by.  Ttv  The footage was presented with evidence of the accident and the protagonists
By Chief Minister Shri.
Rina demanded.  In that context, CM urges SIT on the same day
The decision was taken in the fireplace.  Report to the State in 7 days by this committee
Was asked to comment.  Where the committee today presented this report to Chief Minister Shri Moksha.
And his preliminary report revealed new findings on paper leaks, including fatalities.
This is why it has been decided..
The Minister added that on the basis of this report submitted by SIT, Chief Minister,
Deputy Chief Minister Shri Santinarbhai Patel, Education Minister Shri Bhapya Nines Singh Chadya Ma, as Chief Minister.
My, most important, is the counseling for all the SIT fans and top executives.
This decision has been taken.
The Minister added that in this exam conducted by Gaji Ratta Secondary Yewa Pingi Board.
The beneficiaries were given the exam.  And a partial paradigm on up to 1.5 canoes
Examinations were held.  Examination During Student Examination by Student Leaders
Mobile, i.  Ttv  The footage depicts the horrors of terror.  Check the SIT for this
Rina did.  SIT investigated the video footage in the presence of student leaders.
Mobile footage of the video footage and social media used in the mobile phone.
Were sent to FSL for scientific investigation.  Check out all these extras
Presented by FSL with a subset of the protagonists.  Wherein  Ttv  In footage of the footage
In some places the students wrote moilorthy papers, followed by one another.
Written sums have been obtained, its results justified and intensely investigated.
FSL has been mirrored.  On the basis of which the decision has been taken to cancel the exam.
Shri Jadeja added that he wanted to take the test even though the exam was not taken aback.
SIT’s plan to hold a pro-education parade in North and May
Examinations will be conducted based on the findings of the reports.  He added, non-insolvency activists
The decision by SIT to ensure that you do not pass the exam and take the wrong benefits.
Has been done.  Ttv  In the footage the molearthi is shown to the pupils for 2 races
The disqualification has been decided and the FIR will be filed on their behalf.
Shore coast – 1, Sarynnagar – 2 and Girmanarth district – 2 found in the FIR.
Has been seized.  Similarly, students in the examination room who are studying each other.
Those who were writing have also been selected to be disqualified for that race.
Examination center administrators, clerk supervisors, supervisors also have fair grounds
If you do, the state will decide to take strict action in the strictest of laws.
Which is  As well as blacklisting such institutes as exam centers in the year
Will come.
Shri Jadeja added that the state government has given 2 lakh additional jobs in the last six races.
Has joined the Rakhi Yew, and in the next May, the dependent Pratiya Pandit Parivartan.
The state size is too small to be held.  Paper in this exam in the next May too
There will also be a criminal prosecution for any person who is motivated by the incident of leak.  Present
The state government has decided to file an FIR in Gandhinagar on this occasion.  Even so
He added..
download the official pres note